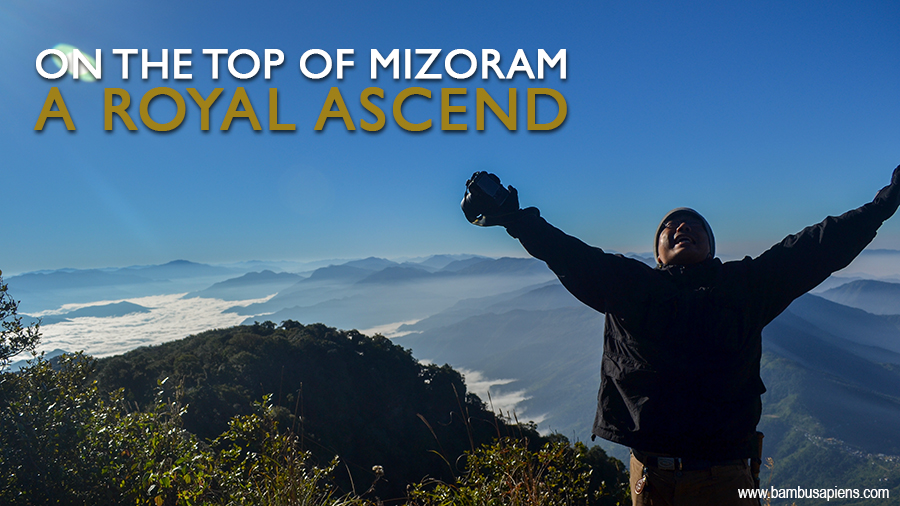 It was Dec. 5th, 2012 05:30 a.m., I was awakened by the most irritating tone of all…an alarm! Waking up at such an hour in a winter morning was not in my routine, if not for a very special occasion. The previous night, I packed my backpacks, keeping everything ready for an early morning Royal ride. As usual, camera, tripod, gps, ors, chocolate, country made knife, torch,  a puan-nuam embedded in a sleeping bag etc. were in my bag. Since it was winter, no insect repellent cream was required. Tent was with B-a.

Firing my ride, I head on to our RV at Ngaizel. My friend B-a, with whom I’ll be traveling was from the West end of the city while I’m from the East end, and we’re heading south. B-a soon arrived. Filling up our fuel, we move ahead towards our destination. The plan was to reach Sangau as early as possible; which is around 230 Km from Aizawl. We took the World Bank road, and at Chalkhan we take a left turn  towards Serchhip. At Sailiamkawn, my partner was stopped by the Assam Rifle Jawans. He was also equipped with knife, camera, gps and other gadgets, may be those looks suspicious. After a while he joined me again. I don’t know why was I not stopped! After having our meal at Keitum, we continued. It was almost 02:00 p.m. when we reached the Tuipui D, where we had to wait for our Royal Enfield to be ferried accross the Chhimtuipui by a mar-boat.

The mar-boat service there had a special guidelines that made us to wait until two LMV arrived.

The mar-boat service here at Tuipui D is the life-line of the South-Eastern Mizoram. The service is operated by the BRTF, 7:00 a.m. to 4:00 p.m. daily except on Sunday. A pedestrian suspension bridge across the river was the only other option available, then.

During monsoon, when mar-boat service is not available, passengers transit, walking across the suspension bridge, catching another vehicle on the other side.

After waiting for a while, finally the mar-boat landed. We loaded our bobber, waiting for others to turn up. In less than 2 minutes, we were ferried across.

The areas around the Tuipui D pier had been protected by the Villagers; as we transverse the river, a school of fish swum around the boat. It was so fascinating that I forgot to click a picture of them fishes!

From Tuipui D, The road to Sangau was mostly on the eastern slope of the hillocks, which make it kinda chilly. The moment when we were on the sunnier side, we have to stopped by, exposed and warm up ourselves. After reaching South Vanlaiphai, a Village next to Darzo, the sun was almost setting. The road was re-surfaced, which left lots of pebbles and made it difficult to ride swiftly. When we arrived at Sangau, it was already dark. We headed straight to our host, who was the relative of my partner.

The next morning i.e., Dec. 6, 2012, we continued our journey, driving towards Farpak, the last point where a vehicle could reach. Since my partner had a permission from the CWW, to conduct his research at Phawngpui, we very oftenly had a field work there, hence, the workers were also familiar with us.

Ascending ~ 500m with a Royal bobber was one hell of an experience. It was a fair weather road. That was not the hurdle, though. But the steepness was. From Thaltlang to Farpak, it was not more than 6 Km. Had we measure the slope percentage, it would definitely be 100% and above.

Finally, we arrived at the Farpak, we parked our bobber at the Old Rest House. We filled our gallon and bottles with water, gearing up for another 7Km uphill trek. The elevation at Farpak was ~1900m and our destination, the peak, was 2157m msl. Since it was not our first time, we were well aware of the patrolling path.

Since there was no water-bodies near the peak, we had to carry maximum amount of water, and that put on another weight. On the way to the peak, sometimes, you have to crawl beneath the clumps of Schizostachyum fuchsianum. And sometimes, through the tall and thick grasses.

It took us 3½ hrs to reach the peak. Setting up the tent and igniting a fire were the first priorities. After which, we started our work.

I was accompanying my Phenologist friend. The main purpose of the trip was phenology. My comrade, B-a, how we call him, was pursuing his doctoral research on the phenological aspects of Rhodondendron vernacularly termed as “Chhawkhlei” in Mizo. Phawngpui National Park (PNP) is one of the few places where Rhododendron grows in the wild, here in Mizoram. Apart from PNP, it is also found at Tualcheng, Champhai, Ţan tlang, Lurh tlang, Farkawn and East Khankawn. The genus is confined in the Eastern highlands of the state.

Even though I often accompanied him on his field work, I have very limited knowldege of phenological sciences. What we usually did, as I could recollect, was covering the buds of a Rhododendron with a net, so as to manipulate its pollination; In a pixelated terminology, they might termed it hacking the pollination 😁. Most of the time, I was his photographer and his personal body guard. He was better in cooking, hence he cooked, while I’m better in chopping and splitting fuel woods, which I did. Like wise, we assisted each other.

There were at least three different species of Rhodendron at PNP. As far as my understanding is concerned, these species grows in a very specific ecosystem. Survival rate and regeneration rate is also very low. Dormancy also is long. Wildfires often threatened its survival.

Phawngpui National Park (PNP) is one of the 10 protected areas, and one of the two National Parks of Mizoram, it covers an area of 50 Km². Entry is permitted after paying necessary fees. However, collection of specimen, cutting of plants, killing, snaring and catching of wild animals are strictly prohibited. For research purpose, permission has to be acquired from EF&CC, GoM. Entering the Park without a guide is also prohibited.

We were done! We’re homeward bound. Trekking downhill and riding downhill were equally uncomfortable. As long as the wheel rotate, it was fine, but there were moments when the wheel could not rotate but slide on the pebbles. After carefully riding downhill, we finally managed to reach Thaltlang. We halt a night at Sangau; the next morning we continue our journey back home.

At Tuipui D, it was the same ol’ story, waiting for the mar boat and two other LMV. But this time, it was an HMV that turned up.

After an intensive research work for years, the Mizoram University finally awarded him a Doctorate degree. You can reach him here https://www.facebook.com/malsawm.kima.7

2 thoughts on “On the Top of Mizoram: A Royal Ascend”